What are the real ISIS capabilities in the cyber domain?

Any ISIS activities become a hot topic after destructive events organized by the Islamic State (IS) during 2015. The whole world is concerned about ISIS plans and afraid of another bloody attacks.

One of the most discussed topic is the Islamic State offensive capabilities in the cyber space. In 2015 various organizations were hit by a number of cyber-attacks allegedly launched by IS hackers. Nevertheless, some cyber security experts presume that a sophisticated group of Russian hackers stands behind the attacks against a French TV station in April 2015 and the hijacking of the CENTCOM Twitter account in January 2015. Anyway, let’s have a look at the timeline of cyber-attacks that are related to ISIS in 2015. Investigate the Infographic. We will appreciate your opinion regarding ISIS cyber capabilities. 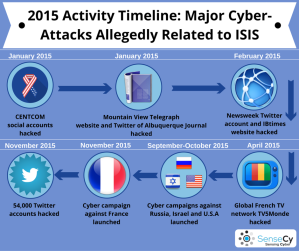 During January 2016 we will publish our annual Cyber Threat Intelligence report, in which you could find fascinating information regarding ISIS cyber activities, recent developments in the Russian underground, technical analysis of self-developed malicious tools that we identified this year, new trends in Darknet platforms, and more.